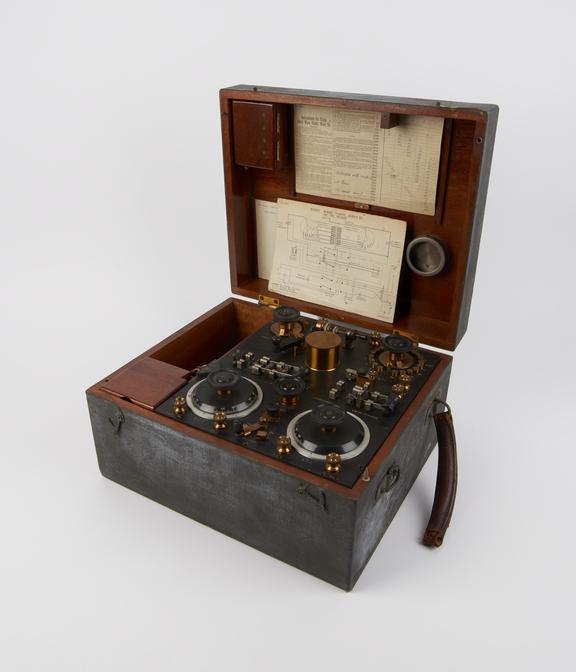 Short wave tuner Mark III, c. 1917. The Short-Wave Tuner Mark III covered the 100–700m band (429 kHz–3MHz). Either a Perikon or carborundum crystal was used for the detector. The carborundum crystal required two 3-volt dry-cell batteries and the usual potentiometer adjusted for optimum sensitivity. There was also a buzzer for calibrating and testing the tuner. The aerial was125ft long laid close to the ground as a single inverted L.

Marconi's Wireless Telegraph Company first developed the Short-Wave Tuner Mark III in 1915. From 1916 on, several variations of this tuner were manufactured by a number of companies, including Robert W. Paul, the W/T Factory, A.T.M. Company, and Johnson and Phillips. The original short wave tuner Mk III was first introduced in 1916 with a variant, the Mk III*, being introduced in 1918.

The Short-Wave Tuner Mark III was primarily used for wireless telegraphy (Morse code wireless communication) by ground stations (mostly artillery batteries) to communicate with British aircraft during the First World War. The tuner was used for communication with night bombers and in training bomber pilots in the UK and was used for reconnaissance aircraft and artillery spotting duties over the trenches in France. The Mark III* was retained in service by the RAF in the immediate post-war years.

By November 1918, the newly established Royal Air Force (RAF) had over 600 wireless-equipped aircraft operating in conjunction with 1,000 ground stations and manned by over 18,000 wireless operators. According to Louis Meulstee’s “Wireless for the Warrior Compendium 1 ‘Spark to Larkspur’ (Wireless Sets 1910-1948)”, 766 transmitters and 6595 receivers were produced.