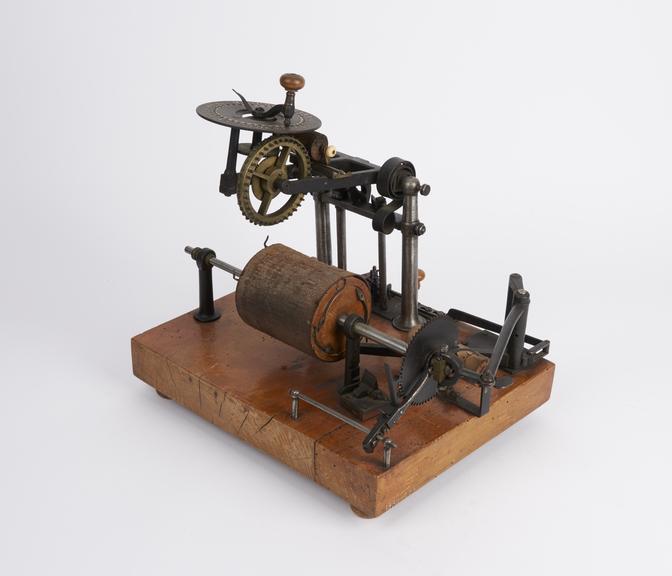 Hood typewriter, made in Kirriemuir, Scotland by Peter Hood, c. 1857

In 1857, watch and clockmaker and inventor Peter Hood of Kirriemuir, Scotland (1836-1873), made two unusual typewriters, sixteen years before the first commercial typewriter was available on the market. One was said to have been made for a James Arrol – a blind man, relative of civil engineer and politician Sir William Arrol, and patron to Peter Hood. Arrol commissioned Hood to make two typewriters even though Hood had no previous knowledge of typewriters. Hood’s typewriter for the blind made for Arrol was shipped to the US and is believed lost. Hood’s other 1857 typewriter – this typewriter – was donated to the Science Museum by a relative of Hood. A newly discovered (as of 2020) third typewriter probably made by Hood has been identified in the Glasgow Museum collections - TEMP.8575 Typewriter, early design, possibly by Peter Hood - which is similar but not identical in appearance and construction to Hood’s typewheel typewriter in the Science Museum collections.

Hood’s typewriter worked but was slow to operate and so was never developed commercially. Hood developed his typewheel typewriter aged just 21 and developed it independently of other proto-typewriters being developed in the US and UK in the mid-1800s. Peter Hood died in 1873, the year recognized as the commencement of typewriter production.