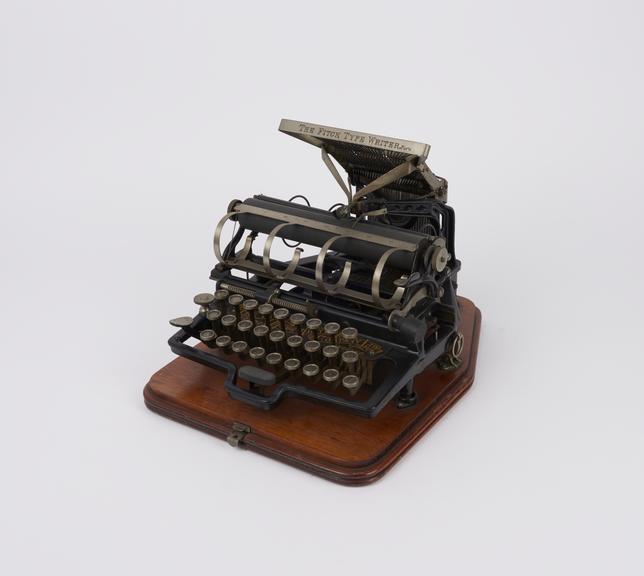 Fitch typewriter No.3287, type bar class, on base board, made by the Fitch Typewriter Company (UK) in London, 1891.

Users of the first typewriters had to work blind, as the writing only emerged after several lines had been typed. The Fitch was one of the first machines to allow prompt correction of mistakes – it was stated to be the second design of type-lever machine operating on the visible writing system.

On the Fitch typewriter, the type bars were positioned behind the paper and the writing area faced upwards so that the result could be seen instantly. A curved frame kept the emerging paper from obscuring the keyboard, but the Fitch was soon eclipsed by machines in which the paper could be fed more conveniently from the rear.

The Fitch typewriter was invented by Eugene L. Fitch, born in New York City in August 1846 but living in Des Moines, Iowa when he invented the Fitch in the 1880s. Fitch was granted a patent on the design in 1886-1887. In 1888, Fitch signed a contract with Brady Manufacturing of Brooklyn to manufacture and these typewriters by the Fitch Typewriter Company were available on the commercial market by 1889.

It was around this time that the design and patent rights (beyond the Americas) for the Fitch Typewriter including related improvements was sold to a British company and production was taken up by the Fitch Typewriter Company in London. By May 1890, British versions of the Fitch (later referred to as the Fitch 2) were being advertised and sold in British newspapers.

The Fitch was one of the most exciting typewriter designs and was a relatively lightweight and portable design, weighing about 5kg (11lbs). But it was not a very durable machine and production did not continue very long.

The Fitch Typewriter Company in London also did not last long: the company issued public shares in May 1890 and, just over two years later, steps were taken to wound up the company in December 1892 and this was completed by April 1894.

Relatively few Fitch Typewriters were manufactured and this is a rare surviving example of one of the first typewriters to produce visible text and allow prompt correction of mistakes, an innovation albeit one soon eclipsed by machines in which the paper could be fed more conveniently from the rear.