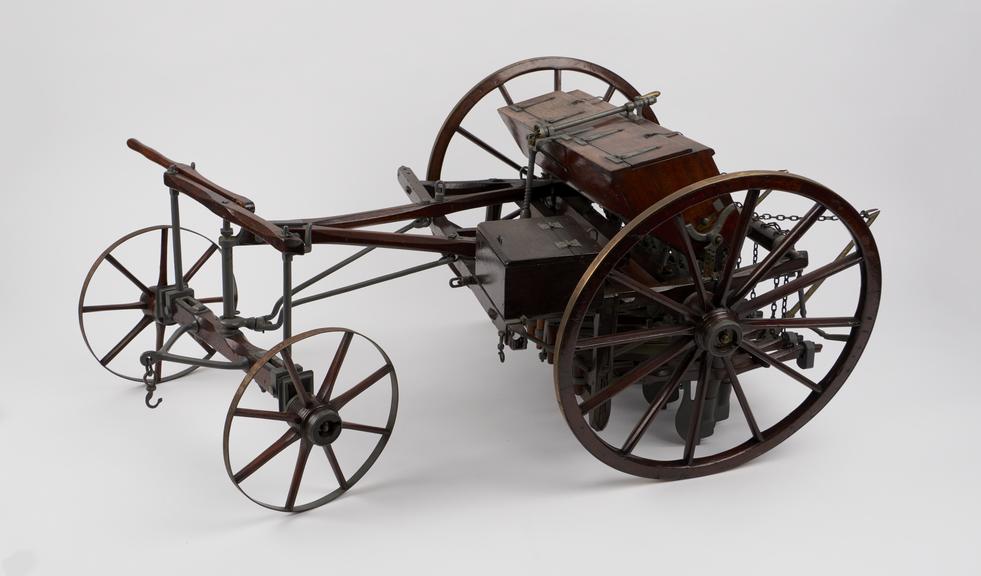 Model (Scale 1:4) of Suffolk corn drill with detachable drag and travelling wheels by Richard Garrett & Sons of Leiston, embodying patents of 1844 & 1846, and shown at the Great Exhibition, 1851

Seed may be sown in one of four ways' it may be broadcast by hand or by seed fiddle, dibbled or drilled. The earliest method was to broadcast the seeds by hand although there is evidence that from 1700-1200 B.C. the Babylonians used a drill plough. Interest in drilling was practically non-existent in this century until it was stimulated primarily by the introduction of the turnip in the 17th century. In 1600 Sir Hugh Platt in his book "The setting of Corn" recommended a method for dibbling wheat, and in 1669 Worlidge suggested the drilling of wheat and outlined a machine for the purpose. The latter when constructed failed to work.

It was not until Jethro Tull produced his drill and horsehoe about 1700 and his book "Horsehorseing Husbandry" in 1733 that the first practical steps towards drilling were taken. Interest increased during the early 19th century and by 1860's, seed drills were of modern design in all essentials.

This particular model of corn drill was shown at the 1851 Exhibition and embodies details patended in 1842 and 1846 by R. Garratt & Sons. It is a highly improved version of Suffolk drill.

The principle of direct drive from the large land wheels to the showing mechanism ensured a uniform sowing rate per yard whatever the machine speed. The seed was scooped out of the hooper by cup-carrying wheels and tipped into a series of nested funnels. The latter allowed each drill to lift independently if it struck an obstacle. There were adjustments for the rate and depth of sowing, and for working on the sloping ground.

credit:
On loan from R. Garrett and Sons