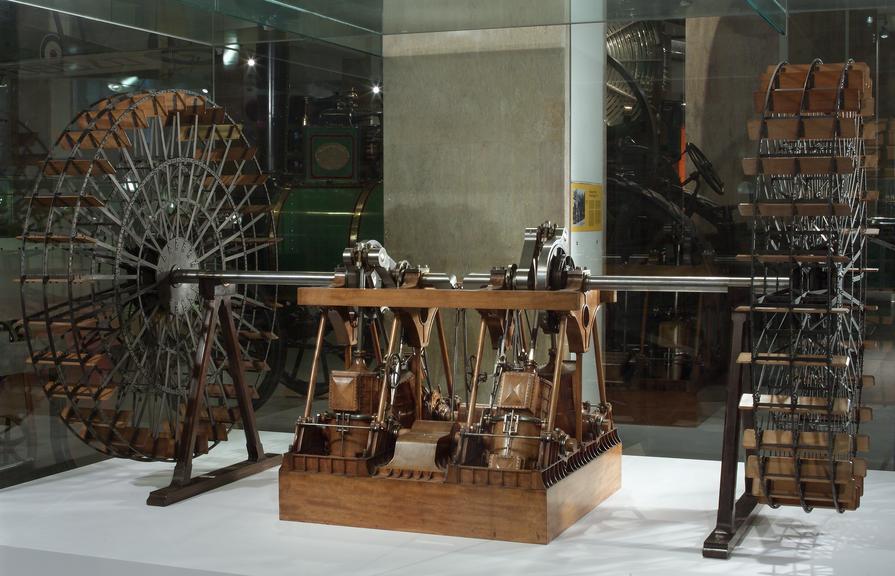 When the Great Eastern was launched in 1858 she was the largest ship in the world. It was also the final and most ambitious project of Isambard Kingdom Brunel, who died shortly after the launch.

The Great Eastern (known, during building, as the Leviathan) was designed to make the trip from England to Australia round the Cape, without having to stop to take on coal. The ship was plagued with problems and did not fulfil the expectations held for her. However, in 1866 she was used to lay the first successful transatlantic telegraph cable linking Britain and America.

The paddle engines on the ship were built by John Scott Russell, a leading naval architect and Brunel's collaborator on the project. This 1:12 scale model was probably built to serve as a design tool and also to help underpin the confidence of investors in the project. The actual engines represented a major engineering achievement, each pair weighing 90 tons, and driving paddle wheels 56 feet in diameter. The engines were the largest of their time and, in total, produced 3150 indicated horsepower - double the power of any previous marine engine.

This model is one of the few surviving artefacts of the Great Eastern, which was broken up for scrap in the late 1880s.