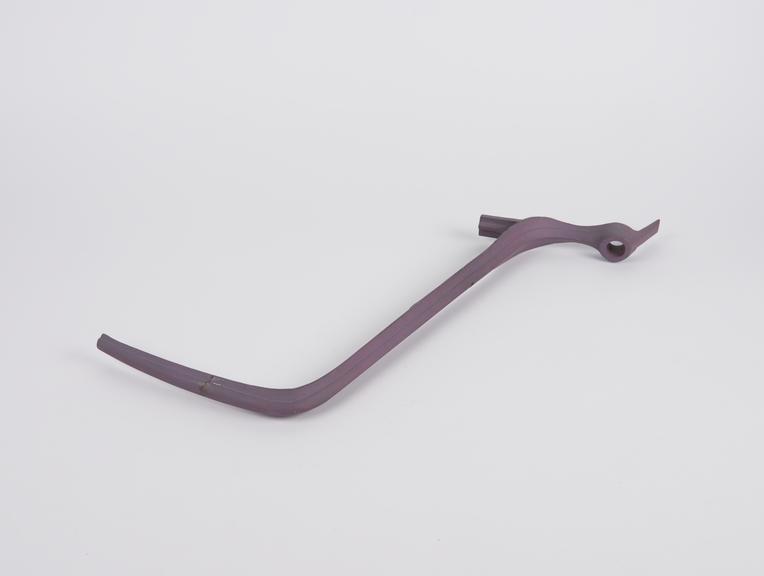 Wooden model of stem of ice breaking S.S. Ermack''
Science Museum Group
© The Board of Trustees of the Science Museum

This model represents the steel casting made in 1898 by the Darlington Forge Co. Ltd. For the stem of the quadruple-screw ice-breaker “Ermack”. The vessel was built by steel by Sir W.G. Armstrong Whitworth and Co. Ltd., at Newcastle for the Russian government.

The stem-post had the usual shape above the water-line, but from a point near the maximum draught of the vessel, it turned backwards and continued in a gradual downward slope for a length of about 32ft. At this point it again assumed a more vertical direction, until it terminated in a boss for the bow screw propeller. The long-overhung bow thus obtained caused the vessel, after impact, to rise upon an ice-field, and this utilise the actual weight of the ship to break through the ice. This action was further assisted by the V-shaped section of the underside of the casting, and also by the violent disturbance created in the water below by the bow propeller. Beyond the boss was a lip or “palm” to take the foremost keel plates, which here rose considerably above the normal keel line. The actual weight of this stem casting was 16.2 tons.

The S.S “Ermack” was propelled by four sets of triple-expansion engines, of 1062 total nominal h.p., constructed by the Wallsend Slipway and Engineering Co. Ltd., of Newcastle, each with three cylinders 25 in. 39 in. and 64 in. diameter by 42 in. stroke. The speed of the vessel was 8 knots. She has three decks and was fitted with electric light.