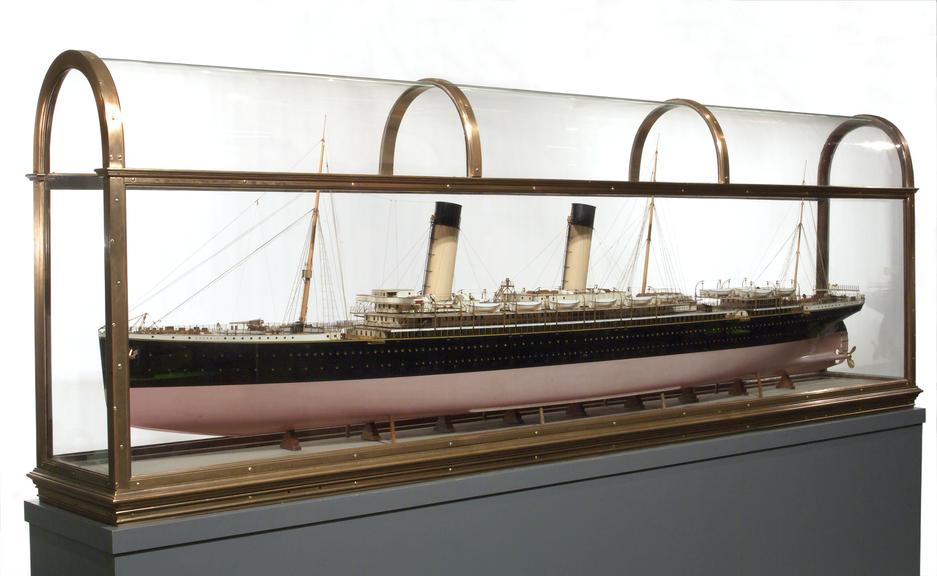 Model, scale 1:64, of the White Star Line Royal Mail Steamer "Oceanic" (1899), original built by Harland and Wolff Limited for the Oceanic Steam Navigation Company Limited. She was the last British transatlantic liner to be launched in the nineteenth century

The Oceanic was the last great British trans-atlantic liner of the nineteenth century. She cost almost £1 million in the money of the time and was 704 feet (217m) in length. She was the first ship launched in over forty years to exceed the length of Brunel’s Great Eastern. In the era of the great liners it was usual to build a fine model like this for the company offices.

In this period the crack trans-atlantic liners were symbols of national prowess. The Oceanic had 26,000 horsepower (195000 kW) from two sets of triple-expansion steam engines and her ability to perform 20-knot crossings came, in part, from being built to Admiralty specifications to allow conversion for naval duties in wartime.

Memoirs of the trans-atlantic liners often note the social life and the luxury offered to first class passengers. However, when Oceanic was launched, emigration from Europe to America was in full swing and by 1910 immigrants were arriving there at a rate of about a million a year – one of the greatest movements of people the world has seen. Oceanic carried 1000 third class passengers making the trip every fortnight. Many immigrants would have travelled on liners like this.

The Oceanic remained the flagship of the Oceanic and White Star Lines until the advent of the Olympic and Titanic in 1911 and 1912. The Oceanic was lost by stranding while under Naval command in 1914.