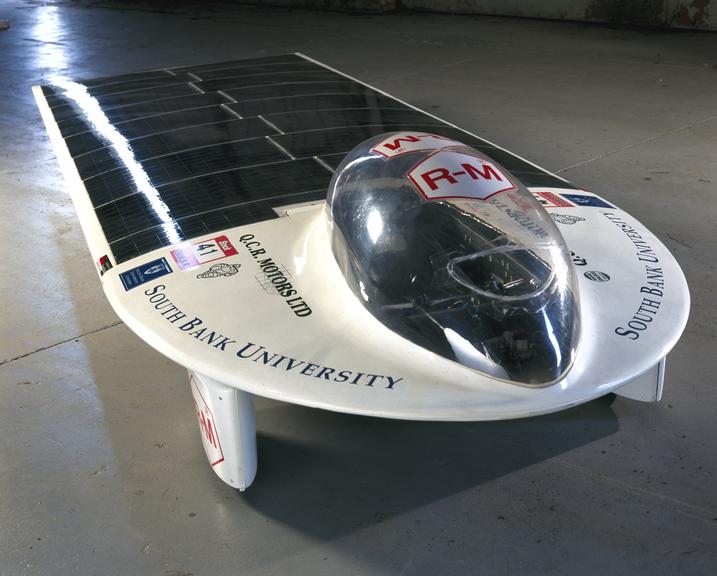 This solar powered car, known as MAD DOG II, was built in 1998 by a joint staff-student team at the South Bank University.

Britain’s most successful solar-powered racing car, Mad Dog 2 was developed by a team from the School of Engineering Systems and Design at South Bank University in London. The team included Dr Mike Duke, Dr Andrew Shacklock and Mr Nigel Burgess, Aasish Kiri, Andy Danylewycz, Anh Thoa Tham, Asim Tahir, Bhavesh Gorasia, Robert George, Marko Taskila and Terry Brown. Built in 1998, the vehicle is the next stage in the project, which begun with the first Mad Dog in 1996.

Mad Dog 2 is six metres long, with an aerodynamic design to minimise air resistance. It is powered by BP silicon monocrystalline solar cells, and uses a highly efficient brushless DC motor. The car was built to take part in the 1998 World Solar Rally in Japan, in which cars had to complete as many laps as possible over three days. The car came first in the Stock Class, attaining speeds of over 40 kilometres per hour.

The Mad Dog project is about much more than racing. The ultimate goal is the construction of the ‘Millennium Car’, a prototype solar-powered family car to investigate the viability of a sustainable energy vehicle. The Mad Dogs have raised public awareness of the possibilities of alternative energy by appearing at numerous events throughout the world.