Satirical print of a failed balloon launch from Foley House, London in 1784 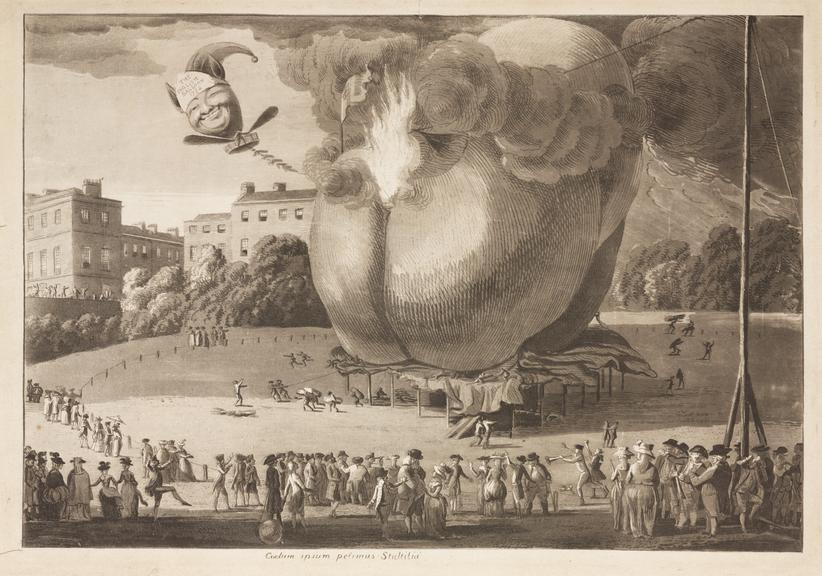 print, aquatint printed in brown ink, The English Balloon 1784. [by Paul Sandby]. Titled within image, on jester's cap.
Science Museum Group Collection
© The Board of Trustees of the Science Museum, London

Print (etching with aquatint). Satirical depiction of John Sheldon and Allen Keegan’s failed balloon launch from the gardens of Lord Foley’s house in Portland Place, London, in September 1784. The balloon’s enormous shape is exaggerated to resemble a human bottom from which flames erupt and smoke billows. A much smaller balloon appears to shoot out of the fire, in the form of a grinning head with ass's ears wearing a jester’s cap lettered ‘THE ENGLISH BALLOON 1784’. Spectators watch from the ground and the garden wall as people attempt to bring the situation under control. Lettered underneath the image ‘Caelum ipsum petimus Stultitia’ ['In our foolishness, we reach for the sky itself'], from Horace, Odes 1.3. Designed and etched by Paul Sandby, probably London, 1784.

This print by Paul Sandby satirises one of the very earliest hot air ballooning attempts in England. It shows the so-called ‘Keegan’s Balloon’, which went up in flames during preparations for its highly anticipated launch from the gardens of Lord Foley’s House in Portland Place on 29 September 1784. The balloon was reportedly constructed by the tradesman Allen Keegan to the designs of Dr John Sheldon, an anatomist, surgeon and Fellow of the Royal Society who was also a ballooning enthusiast. Sheldon went on to make a balloon ascent from Chelsea in October 1784 with the French aeronaut Jean-Pierre Blanchard (for a depiction, see Science Museum Group object no. 1937-874).

Sandby’s print is based on a realistic, eyewitness drawing of the incident at Foley House made by his friend Charles Francis Greville, who lived nearby (now in the British Museum: object no. 1880,1113.4515). In Sandby’s depiction, though, satirical elements are added: the balloon resembles a giant human bottom, expelling a smaller balloon in the form of a grinning head with ass's ears wearing a jester’s cap. These scatological references and emblems of idiocy speak to broader contemporary criticism of ballooning as a foolish, frivolous pursuit. This is reiterated by the Latin inscription underneath the image taken from Horace’s Odes 1.3, which translates literally as: ‘In our foolishness, we reach for the sky itself’.

The print forms one of a group of ballooning satires by Sandby (SMG object nos. 1997-1829 and 2000-124). A more realistic view of the disaster at Foley House may be by Sandby as well (SMG object no. 1950-300/4). The small balloon with jester's cap also appears in another Sandby print accompanied by lines of verse, the last couplet of which refers explicitly to Keegan's balloon: 'How Vain Philosophers will Prate, how Vain is all our trouble, | This World like Keegans [sic] Huge Balloon is nothing but a Bubble' (see, for example, a copy in the British Museum: object no. 1868,0808.5400).

Although hot air ballooning was often dismissed and caricatured as a trivial enterprise with no real scientific merit, it was nevertheless a very popular spectacle and there was a roaring trade in associated prints and souvenirs.

Orrery made for the Earl of Orrery (demonstration models; orreries; planetaria (models))