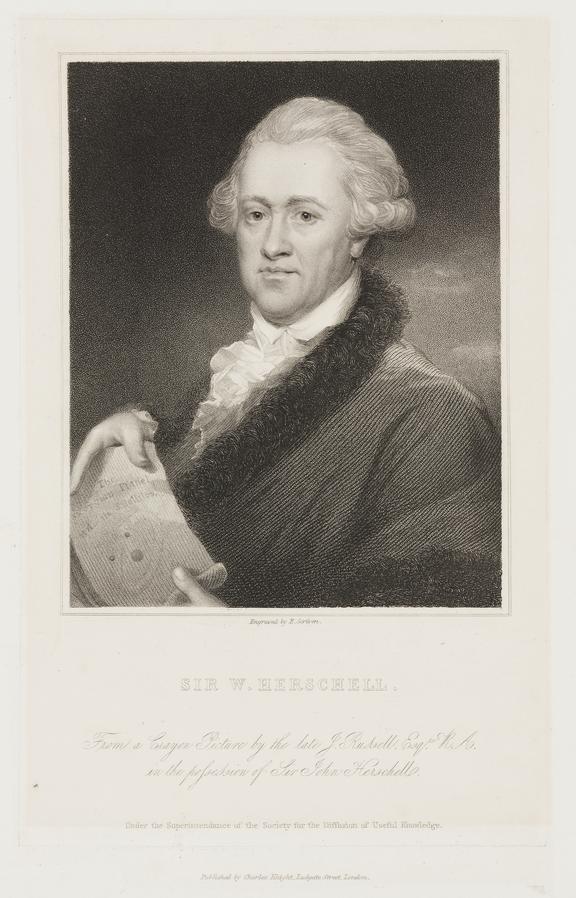 Print (stipple engraving). Engraved by Edward Scriven after John Russell; published by Charles Knight, London, 1835. Titled ‘SIR W. HERSCHELL.’. The print is a half-length portrait of William Herschel, shown against a generally plain background in a simple rectangular frame. Facing to the left, he wears a wig, fur-trimmed coat and cravat. In his hands he holds a drawing of a planet orbited by two moons, titled ‘The | Georgian Planet | with its Satellites.’ Lettered underneath the composition with title, maker and publication details as follows: ‘Engraved by E. Scriven. | SIR W. HERSCHELL. | From a Crayon Picture by the late J. Russell, Esqre. R.A. | in the possession of Sir John Herschell. | Under the Superintendance of the Society for the Diffusion of Useful Knowledge. | Published by Charles Knight, Ludgate Street, London.’.

Hanover-born musician William Herschel came to London in 1762, but soon moved to Bath where he was joined by his sister Caroline. Both were fascinated with astronomy, and spent long hours making painstaking observations. William also had reflecting telescopes made, grinding and polishing their mirrors and lenses himself (see, for example, Science Museum Group object no. 1876-1000).

William Herschel is perhaps most famous for discovering the planet Uranus in 1781, which gained him the patronage of King George III and a home near Windsor. It was the first discovery of a new planet since ancient times. This stipple-engraved portrait by Edward Scriven depicts Herschel holding a drawing of Uranus referred to as ‘The Georgian Planet’. Herschel’s original choice of name, in honour of King George III, proved unpopular outside Britain, and the planet was renamed Uranus after the Ancient Greek god of the sky.

The engraving was published alongside a biography of Herschel in ‘The Gallery of Portraits: With Memoirs’, vol. V (London, 1835), between pp. 104-105. This multi-volume work was one of several whose publication was overseen by the Society for the Diffusion of Useful Knowledge, founded with the intention to broaden public access to educational resources.

Scriven’s engraving was made after a pastel or ‘Crayon’ portrait by the artist John Russell, whom Herschel first met around 1784. Russell was noted for his pastel portraits, but he was also fascinated by the Moon and produced the most thorough and detailed studies of it in existence at the time. One of these beautiful studies – also executed in pastel – can now be found in the Science Museum Group’s permanent collection (see SMG object no. 1922-34), as can several Moon globes based on his observations (see, for example, SMG object no. 1949-117).