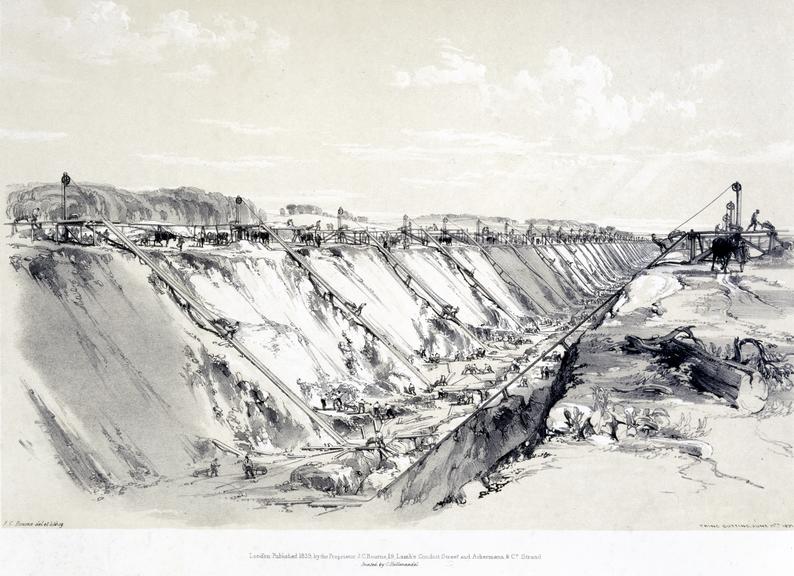 This lithograph by John Cooke Bourne depicts the creation of Tring Cutting. A ‘cutting’ is a type of excavation that carves a route through rock or dirt. This print is one of the few early railway views that shows the vast amounts of labour involved in remoulding the landscape, not to mention the primitiveness of the technology used. Most railway prints from this period produced neat and ordered views. Figures, if they appeared at all, were either groups of the admiring well-to-do, or rustic peasants standing idly at the side of the line. In Bourne’s depiction, by contrast, each figure has both function and purpose. Navvies are shown in characteristic postures: working with tools and with their bare hands, talking, supervising, and resting. The print provides a reminder that it was human labour above all else that built the railway system.

When construction of the London and Birmingham Railway began less than a mile from his home, John Cooke Bourne, like many people, was fascinated. He began to execute drawings of the excavations taking place on the southern part of the line between Euston and Primrose Hill Tunnel. At first these were purely for his own interest, but as they increased in number Bourne sent examples to the noted antiquarian and topographer John Britton. Britton was impressed with the drawings, and as a railway supporter he believed their publication would help to win over people sceptical of the railways. 36 of Bourne’s wash drawings were chosen for publication, appearing first in a four-part ‘Series of Lithographed Drawings on the London and Birmingham Railway’ (1838–1839), priced at 1 guinea per part. The 4 parts were later re-issued as a single volume under the title ‘Drawings of the London and Birmingham Railway’. This lithograph is from that series.

The lithograph series was published by Ackermann. The firm’s Anglo-German founder, Rudolph Ackermann, was an early adopter of lithographs. He began to publish them in 1816, making Ackermann the first significant lithographic press in England. The firm played an important part in popularizing the new print medium. Ackermann had found out about lithography from its inventor, Alois Senefelder, who was a friend of a friend.

It has been estimated that no fewer than 2,000 prints of railway subjects were produced during the years 1830 to the late 1840s, and scarcely a line opened without at least one view of its engineering accomplishments being published. It is difficult for us today to understand the emotional as well as financial commitment to railways during these early years. The railway was often seen as a slowly spreading symbol of change and progress towards a better world.