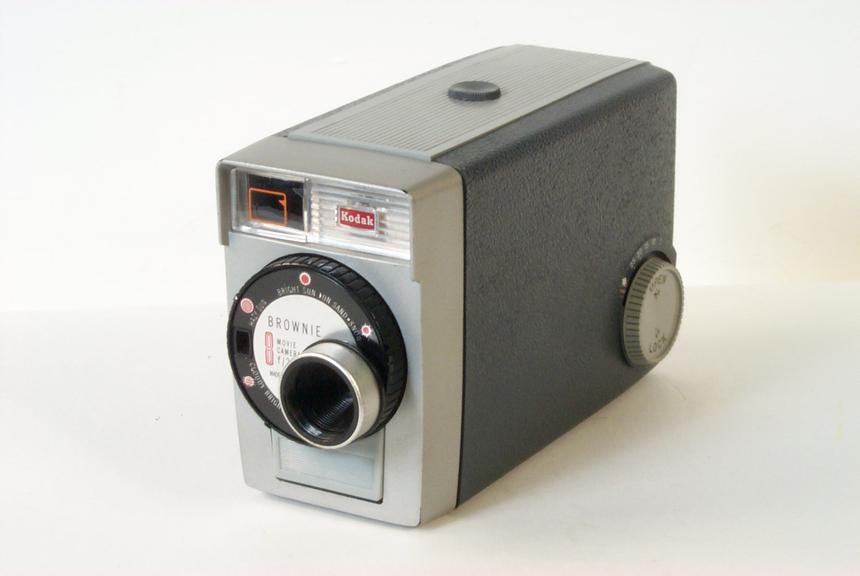 Brownie 8 8mm movie camera, made by the Eastman Kodak Company in the United States, c. 1960.

The Brownie 8mm Movie Camera is a low-priced quality clockwork-driven camera with a fixed-focus f/2.7 13mm Kodak Cine-Ektanon lens. The camera was manufactured between 1960 and 1962, and originally sold for $24.50.

The exposure is set using the dial around the lens, either by f/number or symbols for the light conditions. There was a telephoto converter available and the direct viewfinder was etched with frames showing the framing for normal and telephoto. The motor is powered by a 'tensator' spring. film capacity is 25ft of Double 8mm Movie Film on a 25ft spool.

The camera has a film pull of 7ft per winding of the motor (approximately 35 seconds running time). Lens: 13mm Kodak 'Cine-Ektanon' lens f/1.9 fixed focus which is limited to a maximum aperture of f/2.7. The camera is assembled from both Eastman Kodak Company and Kodak Limited parts. It is of the sprocketless type.

The case and side panels are moulded in polystyrene and the front which houses the lens, shutter and claw mechanism is made from phenolic material. The diaphragm consists of a rotatable disc containing apertures giving half stops from f/2.7 down to 2/19 and is located in front of the lens.

The diaphragm cover plate carries a boss onto which is cemented the lens hood which has an internal thread to accept a telephoto converter. The footage indicator is located in the cover and embodied in the locking knob. It is in the form of a cam which rises on the film on the supply spool and is engaged by the action of locking the cover. A standard 1/4inch Whitworth thread tripod nut is located at the base and a 5/16 UNC nut at the top of the camera which is for the attachment of the Brownie 8 Movielight.

There is an exposure dial on the nameplate the indicators for which are carried on the periphery of the diaphragm plate which encircles the nameplate.

credit:
The Kodak Collection at the National Media Museum, Bradford