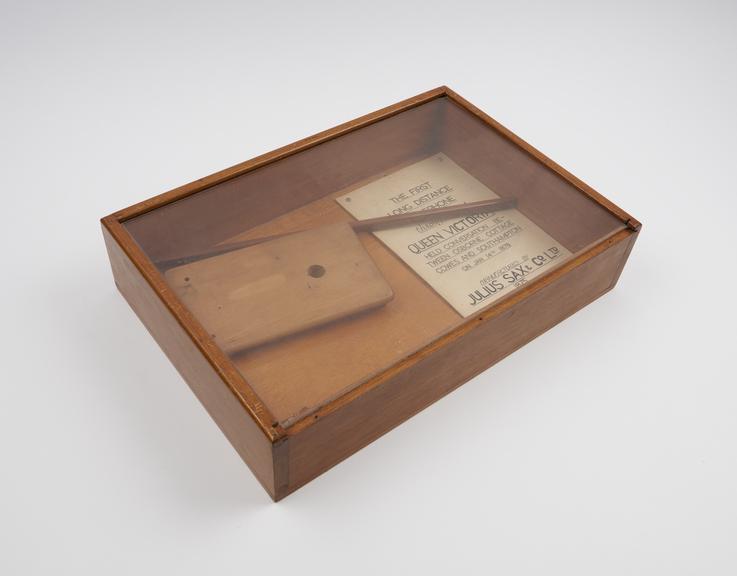 This box was used to store the telephone, first patented in 1876 by British-born inventor Alexander Graham Bell, which revolutionised business and social life.

Bell gained welcome publicity for his new device by demonstrating it to Queen Victoria, Princess Beatrice, and the Duke of Connaught in the Council Room at her residence, Osborne House, on the Isle of Wight. Bell explained how the telephone worked and gave a demonstration, assisted by Colonel W.H. Reynolds of the US Army and civil and telegraph engineer Charlton James Wollaston. The mouthpiece was also the earpiece, and the user had to listen and speak alternately.

On the evening of 14 January 1878, contact was made with nearby Osborne Cottage, the residence of Sir Thomas Biddulph, and also with Cowes, Southampton and London. Queen Victoria conversed with Sir Thomas and Lady Biddulph at Osborne Cottage and Kate Field, a US journalist and publicist for Bell and his telephone who was also at Osbourne Cottage, sang a number of songs for the Queen. Others present at Osborne House including Princess Beatrice and the Honorable Mrs Ponsonby also spoke with Osborne Cottage. Later that evening, telephone conversations were also held with Major Webber of the Royal Engineers at Cowes (songs were also sung, by tonic-sol-fa singers, not by Major Webber) and later still with William H. Preece, a senior electrical engineer at the General Post Office, at Southampton. Later still, a telephone connection was made with London, where a musical organ was played by a Mr Wilmot and cheering and laughing could be heard down the line from London, nearly 80 miles away. The experiments lasted from 9.30pm to midnight and were a great success, being reported in “the Times” newspaper and elsewhere.

The UK’s first glimpse of the telephone was in September 1876, when Bell’s invention was exhibited in Glasgow at the annual meeting of the British Association for the Advancement of Science. Sir William Thompson (later Lord Kelvin) dubbed it “the greatest by far of all the marvels of the electric telegraph”. Bell was awarded his UK patent on 9 December 1876.

Bell’s telephonic demonstrations for Queen Victoria were the UK’s first publicly witnessed long-distance calls, placed from Osborne House on the Isle of Wight to London, Cowes and Southampton. The then-magical potential of the telephone had been expressed enticingly in an 1877 flyer: “Persons using it can converse miles apart, in precisely the same manner as though they were in the same room.”

Following the demonstration before Queen Victoria, one of the her staff wrote to Bell to inform him “how much gratified and surprised the Queen was at the exhibition of the Telephone”.

Numerous technical improvements enhanced the range and clarity of the telephone and within a decade of Bell’s demonstration in January 1878 there were over 250,000 telephone sets in use worldwide.