School children being evacuated from London 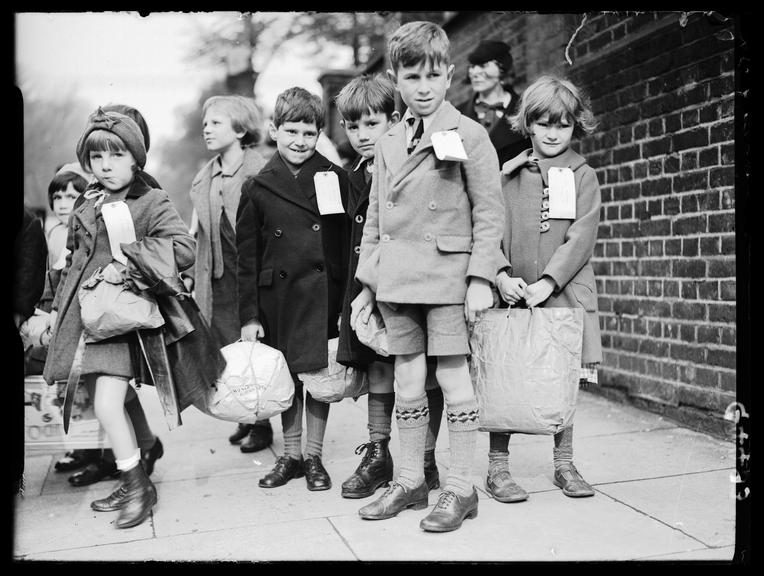 A photograph of children being evacuated from London, taken by George Roper for the Daily Herald newspaper on September 28, 1938.

A photograph of a group of evacuees, taken in September 1938 by George W Roper for the Daily Herald.

The children, carrying a few possessions in brown-paper parcels and bags, are moving for safety from Haverstock Hill School in Hampstead, London, to the countryside. Each child wears a ticket on their coat to identify them in the event of their being lost.

With the threat of war, the Government Evacuation Scheme was developed in summer 1938 which classified areas of the country as either 'evacuate', 'neutral' or 'reception' depending on their level of risk from enemy attack. In September 1938, war between France, Britain and Germany seemed likely. An agreement was reached, however, in Munich in late September by British Prime Minister (Arthur) Neville Chamberlain (1869-1940). Germany annexed the Czechoslovakian Sudetenland. War was avoided, but only for a year. From the small-scale evacuation in September 1938 until September 1944 when evacuation was officially halted, nearly 1.5 million people were evacuated from cities and towns to rural areas.

Photograph of Hedy Lamarr and her mother Gertrude Kiesler (photograph)

Photograph of actress Hedy Lamarr in the 1933 film 'Ecstasy' (photograph)