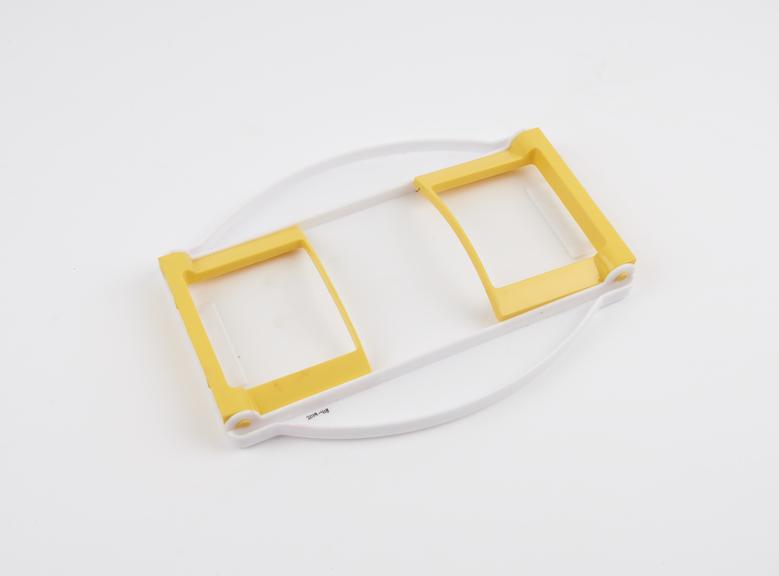 Plate raiser used by Rosaleen Moriarty-Simmonds, who lives with impairements caused by thalidomide, originally used for heating up two meals in the microwave at the same time, unknown maker, 1994-2005.

Rosaleen is a businesswoman, artist, campaigner and adviser in the field of disability rights and equality. While pregnant, Rosaleen’s mother took a drug containing thalidomide on medical advice which caused the development of Rosaleen’s limbs to be impacted.

Rosaleen uses adapted devices in her every-day life from her electrically powered wheelchair to her smartphone holder. Rosaleen and her husband Stephen developed low-tech solutions to make her meals higher and easier to eat out of easily accessible household items as well as converting other products available on the market to suit their needs.

This object makes it easier to heat two meals in the microwave at the same time but can also be used to make food sit higher up off of the table, making it easier for Rosie to access.

People living with impairments caused by thalidomide have often had to make do with products that were not designed for their needs. Another example is that high street clothing is rarely designed for people with missing limbs, and specific clothing often has to be chosen and altered to suit people’s bodies.

Crash helmet, made for child affected by the drug thalidomide (crash helmet)