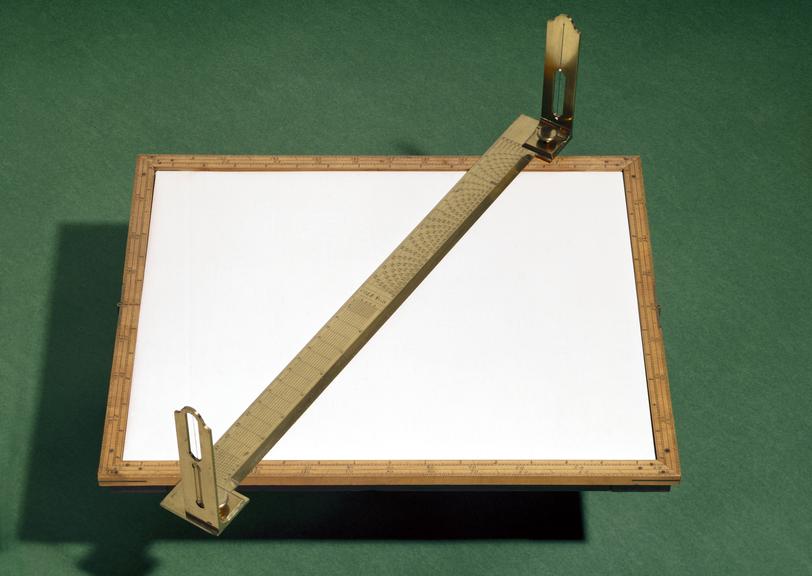 This plane table was made by Benjamin Cole. Plane tabling is a method of survey which allows observations to be plotted directly on a map by a surveyor in the field. Modern versions are still used today for filling in or updating detail on street plans; in the 18th century it gave a rapid map without requiring the transfer of notes and measurements from a notebook.

When the surveyor makes observation with his theodolite, level and chain, he records his measurements in a notebook and returns to his office to plot the data and prepare a map.

This plane table consists essentially of a drawing board, the lower side of which carries a joint for attachment to a tripod, and a brass alidade or sight-rule, which is merely a straight-edge fitted with sights. The alidade is used to sight objects required to be located on the map and to record on the drawing paper the directions in which the objects lie relative to the point of observation. The plotting scales engraved on the alidade allowed the surveyor to prepare his map with the minimum of calculation.

The plane table is unique among surveying instruments in surviving almost unchanged in form from its appearance in about 1600 down to the present day. Some alidades are fitted with a telescope and vertical arc instead of the observations and to allow elevations to be determined; even this feature, however, was well-established by the latter part of the seventeenth century.