Made:
1962 in Rochester and England 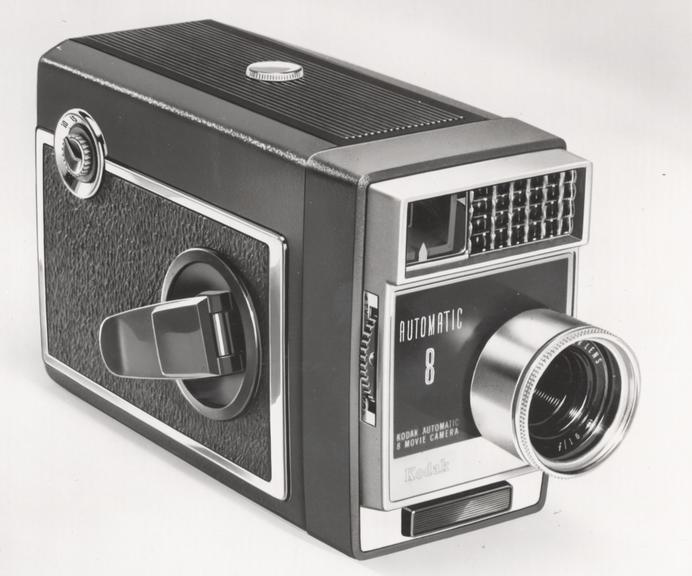 Kodak automatic 8 camera and carton packaging, 1962. For 8mm film, 25' double run; Kodak Ektanar lens F:13mm f/1.6. Auto exposure, direct setting of aperture by photocell. Clockwork drive; DV optical finder, low light signal. In original packing with instructions. Lens: 13mm Kodak 'Ektanar' Lens f/1.6, the lens is limited to a maximum aperture of f/1.9 due to the requirements of the automatic exposure control. Viewfinder: of the telescopic type, incorporating two moulded lenses housed in the top of the case. It includes a zone type low-light indicator. The front finder lens has a parallax correction mark for close-ups from 3-5ft. Finish: the general finish of the camera is a light grey case, front plate and shutter housing with dark blue/grey side panels.

Kodak Automatic 8 Movie Camera, made in the United States by Kodak in 1962.

The Kodak Automatic 8 was a home movie camera intended to be simple to use by anyone. The camera was advertised in the July 1961 issue of ‘Popular Science’ with the caption: ‘There’s nothing to set, nothing to remember. Electric eye sets the lens opening for you – continuously, automatically. And the camera is always in focus’.

It has automatic exposure control and powered by a 'tensator' spring. The camera capacity is 25ft of standard Double 8mm Movie Film on a 25ft spool. The camera has a film pull of 7 ft per winding of the motor (approximately 35 seconds running time).

The camera is assembled from Eastman Kodak Company and Kodak Limited parts. It is of the sprocketless type and the case and side panels are moulded in polystyrene. The shutter housing is made from a phenolic material. The automatic exposure control system is located immediately behind the front plate and adjusts the aperture to suit prevailing light conditions down to f.16. Adjustment for film speed is made by a control knob on the side of the case. A bezel around the control knob is marked with ASA arithmetic film speed numbers 10, 16, 25 and 40.

The front plate carries a threaded boss on to which is screwed the lens hood. This hood houses an indoor/outdoor conversion filter ('Wratten' No 85) which is operated by a knob projecting through the side of the plate. The footage indicator is located in the cover and embodied in the locking knob and is in the form of a cam which rides on the film on the supply spool. A standard 1/4' Whitworth thread tripod nut is located at the base of the camera and a 5/16 UNC nut at the top of the camera which is for the attachment of the Brownie 8 Movielight.

credit:
The Kodak Collection at the National Media Museum, Bradford