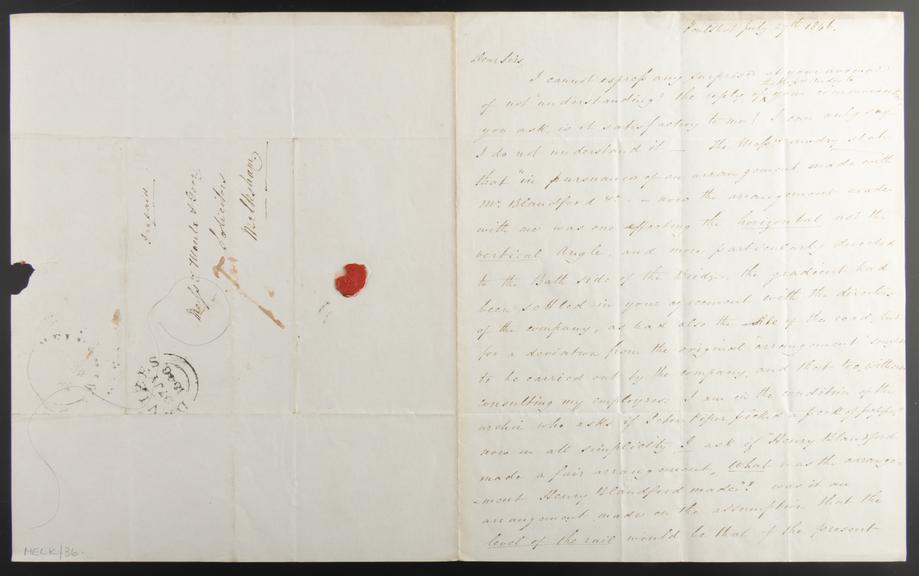 Letters and copy letters and associated material of the Clerk to the Melksham Turnpike Trust Commissioners re dispute with the Wiltshire, Somerset and Weymouth Railway Company over whether or not to build a bridge to take the road over the railway. The Directors of Railway include HG & JW Awdry.

The principal parties involved in the correspondence were:

• Moule & Gore, Solicitors, Melksham who acted as clerks to the Trustees of the Melksham Turnpikes Trust. Charles Thomas Moule is listed in the 1851 Census as Solicitor of Spa Villa, Melksham, Wilts, born c 1800.

• Mr W H Ludlow Bruges, acting as a mediator between the two interests and holding a watching brief for the locality in relation to the passing of the Act of Parliament for the construction of the railway. In the 1851 Census he is listed at Seend Mansion as Deputy Lieutenant and Justice of the Peace.

• Henry Blandford, civil engineer charged with the construction of a road bridge to carry the Turnpike over the proposed railway line. He is listed in the 1851 Census as Surveyor and Civil Engineer as well as farmer of 71 acres, at Marsh Farm, Rowde, Wilts and born in Wales c 1806.

System of Arrangement:
A series of forty-six letters, numbered in sequence chronologically

copyright:
Copies may be supplied of items from this archive, provided that the copying process used does not damage the item or is not detrimental to its preservation. Copies will be supplied in accordance with the NRM’s terms and conditions for the supply and reproduction of copies, and the provisions of any copyright legislation.